When we first met Paul Erickson, he was in full Hobbit garb at Wizard World.  We interviewed him (On the Beat with Paul Erickson at Wizard World 2013) and learned that he was the foremost Tolkien Parodist.  I quickly realized that Erickson would not be a one-off interview.  He was destined to be a regular stop on my convention circuit.
Since that first meeting, Erickson has branched out a bit, broadening and redefining his title as the foremost Nerd Parodist.  This coincided with his newest book, Jar Jar Wars, obviously a parody of Star Wars.
At Wizard World Chicago 2015, Erickson surprised me by inviting me to take part in The Nerd Readers Theatre Ensemble reading of Jar Jar Wars.  I recapped the experience at Jar Jar Wars Starring Johngy as CU L8R.  My part was short and sweet and I was thrilled to be a part of it all.  I volunteered for any future event.
The first future event has been announced.  Erickson will be emceeing The Star Wars Premiere Night Fundraiser on Thursday, December 17, from 7:00 until 8:00 at Defiant Comics, 7234 Madison Street in Forest Park, IL. Admission is $5.00, and all profits will go to Opportunity Knocks, a non-profit organization that serves young people who have developmental disabilities in the Oak Park, Forest Park and River Forest area.
One of Erickson's stated goals is to help that George Lucas fellow.  Obviously, this fundraiser will celebrate and raise awareness for “Star Wars VII: The Force Awakens” which premieres worldwide at midnight on December 17.
This evening will be a Star Wars extravaganza.  Erickson will be signing and selling his parody novelization “Jar Jar Wars IV: A New Dope.”  There will also be trivia, Jedi Plinko, a Star Wars costume contest, readings from Jar Jar Wars (that's where I am hoping to reprise my role) and lots of other cool Star Wars related fun.  I'm not even a huge Star Wars fan, but I loved the event at Wizard World and this one will be even better.
Erickson is a very talented, humorous, great guy (and I am not just saying that because he is letting me join the insanity).  It is very hard to stand out at conventions filled with colorful characters, but that is exactly what Erickson does.  This night will be a blast and I am really looking forward to it.
For more info and updates, check The Star Wars Premiere Night Facebook event page or Defiant Comics Facebook page. 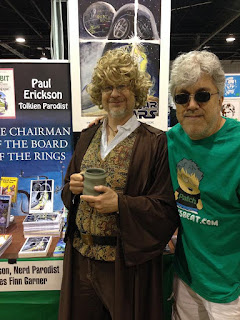