This is a regular series which combines my passion for trading cards with my interest in celebs.  No city combines sports with celebrities more than Los Angeles.  Here are two examples.

A Massachusetts native, actor Michael Chiklis is an avid fan of the Red Sox and Bruins.  Despite his Boston allegiance, he wore the Dodgers uni for a charity softball game.  Chiklis is notorious for signing autographs fro children.  His #31 could be for a lot of players, but I think he is a Doug Rau kind of guy.  Extra points for his clean head.  Hey it worked for Dave Heaverlo! 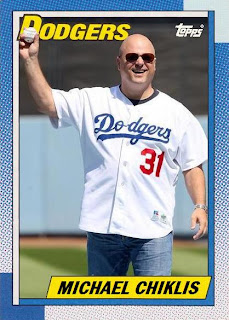 Wearing Duke Snider's retired jersey wouldn't make Meat Loaf a great outfielder, but I think he could handle things in left especially if the other two outfielders were solid (as you know, two out of three ain't bad).  Meat Loaf (or Marvin Lee Aday) has worn a Raiders jersey on stage.  This picture was taken during a charity softball game. 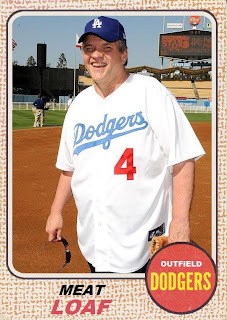