This is a regular series which combines my passion for trading cards with my interest in celebs. Baseball season is ending, but football season is just starting.  What better way to bridge that confusion than with two Hall of Fame quarterbacks appearing on baseball cards?

I know that technically Peyton Manning isn't in the Hall of Fame, but he will be.  He threw a first pitch at a Braves game and you know it was a perfect strike.  My only problem is that Peyton had to share his card with former Braves infielder Pete Orr.  With no offense to Orr, if Peyton had to share a card, his cardmate should have been Greg Maddux, Tom Glavine or John Smoltz. 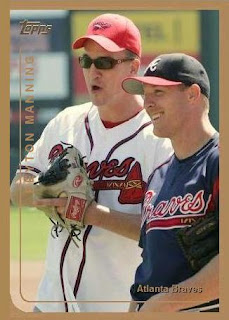 Pittsburgh native Dan Marino was drafted out of high school by the Kansas City Royals.  Had he signed with the Royals, the 1984 card could have been his rookie baseball card.  Instead, Marino went on to have a HOF career with the Miami Dolphins.  He threw out the first baseball (or was it a football?) for the Marlins and earned a Celebrity Jersey Card. 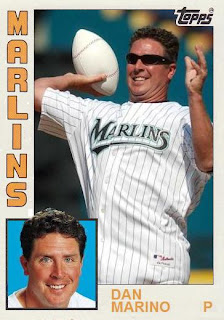 Great job on the Marino what with the little head shot and all. I'm not so sure about him throwing a football. I guess it's funny. He's smiling. Did the catching use a mit or gloves with stickum?