This is a regular feature about friends who have met celebs.

I first stumbled across Dawn Montefusco while researching WordStock, a literary festival in Portland (OR).  Dawn (nicknamed ZigZag for her introverted and extroverted phases) is a writer, social media consultant, life coach, blogger and more based in the Portland area.
She has a couple of sites.  One is her professional site.  The other is her blogsite Ms. ZigZag and it is full of ...well just about everything and anything.  That includes poetry, adventures, introspection, fun with friends and much more either serious, silly or somewhere in between, but all interesting.
Recently, ZigZag met Joe Rogan, an actor and comedian and a favorite among my friends.  Now, I will turn it over to ZigZag...
When I bought my ticket to see Joe Rogan at Helium Comedy Club in Portland, Oregon I had no idea what I was in for. I had only heard him on podcasts and youtube, but I have always loved his sharp wit, crass sense of humor, and progressive intellect. Needless to say the show was amazing. Joe performed for about 90 minutes and was hilarious for every minute of it. The crowd went crazy for Joe. For a guy who spews the word f*** endlessly, and brags about pot smoking, Rogan was amazingly cerebral and astute on some serious topics: aging, gay rights, death, religion and the like. This is one of the reasons I have such a huge crush on the man. But there was a catch. 80% of the crowd was men (mostly big guys in baseball caps) and the women that showed up looked slightly annoyed, like they were only there to satisfy their boyfriends. I've never seen so many sour-puss faces on females. Granted, Joe was making some intense jokes, but hey this is comedy and Joe loves to push to the edge. Lighten up ladies.

After the show Joe and the other comics were in the lobby and took pictures and provided autographs to everybody. He was really sweet and patient with everyone. I can't wait to see him again.
I really appreciate ZigZag sharing her story.  I have never met Rogan, so this is as close as I could get for now.  Maybe someday, I'll catch Rogan at one of his appearances and I'll have my own story to tell.  Actually, I'd like to meet ZigZag someday, too.  Until then, I hope you enjoyed ZigZag's and I hope you will check out her site.  You won't be disappointed. 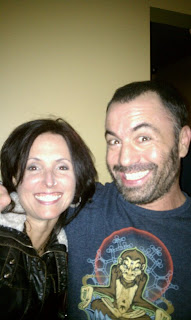 ZigZag Montefusco and Joe Rogan in Portland, OR-Early 2011.
Posted by Johngy at 5:55 AM

She sounds cool. Of course, with Zigzag as her name, she has to be cool.