Celebrity Jersey Cards is a regular feature which attempts to combine my lifelong passion for trading cards with my interest in celebrities.  Today I am saluting the two teams in the World Series.

First, because I am cheering for them, the Detroit Tigers are represented by actress Erin Cummings.  Cummings has appeared on several episodic tv shows, but it was probably her role on Detroit 1-8-7 which brought her to Comerica Park to throw out the first pitch.  I like her form (oh and her pitching style, too). 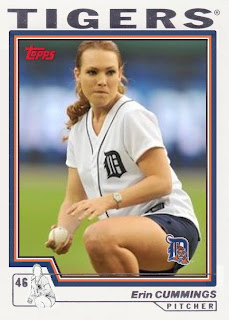 I know it is unusual to have a Hall of Famer take second billing, but Jerry Rice has handled it before, being a receiver for two HOF quarterbacks.  Rice gets extra credit for appearing on Steve Young's earlier Celebrity Jersey Card.  I like Rice and I don't mind the Giants.  I just happen to like the Tigers better.  Besides, my Gekas friends would abandon me if I cheered against their beloved. 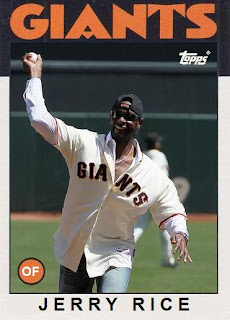