Joshie Watko is one of my buds whom I have never met, but I feel like we have.  Maybe it is because I have been regularly following his site, WrestlingMemorabila.blogspot.com.
Josh is a great wrestling fan.  He is knowledgeable, respectful and interesting.  He puts all that together to produce very interesting pieces about meeting wrestlers, wrestling merchandise and other fun stuff.  He is also an occasional contributor here and he is always welcome.
Josh recently attended Ringside Fest and sent me his report.  He also sent an exclusive picture of him and CM Punk.  He sent it here without putting it on his own site.  How cool is that?
As always, I will let Joshie take it from here...

It took thirty years for me to visit The Big Apple, and what else would get me there but a wrestling autograph signing? This event happened to be Ringside Fest and featured appearances by CM Punk, Sin Cara, and A.J. Lee. While the latter two were suitable mid-card talent, it was clear that the true draw was "The Voice of the Voiceless" himself.
The irony is that for nearly a decade, CM Punk appeared almost monthly at events anywhere from 2 to 15 miles from my own home. IWC here in Pittsburgh was one of the first independent promotions to book Punk on a regular basis. The problem is that despite being a fan from the first time I saw him in the ring, back in those days I only ever bothered to obtain one autograph and completely skipped getting a photo op. I guess it was a blessing in disguise, as I thoroughly enjoyed the city that doesn't sleep and am glad that I finally had a "wrestling" reason to go.
Despite being the top heel in WWE right now, Punk largely ignored that in meeting his fans. From day one he has always had the ironic and somewhat wise attitude, but it's really what you expect from Punk. Perhaps because of an overabundance of children attending this event, he seemed to have less of that demeanor this time around.
Punk was signing everything from giant cardboard representations of his own cranium to all of the new action figures and promotional photos available. I chose to have his most recent magazine cover, the 2012 Pro Wrestling Illustrated "PWI 500" signed.
Despite a few hiccups over crowd control, Ringside Fest was a worthwhile event to get one of the top stars of the industry. Although it would take another very large name for me to attend another event under the banner, I don't know how long I'll be able to wait to return to NYC. It truly is everything I could've imagined and more.

I really appreciate Josh's contributions.  Some day, we will attend an event together and co-produce a report for both of our sites!  Until then, check out JW's Wrestling Memorabilia...I always do! 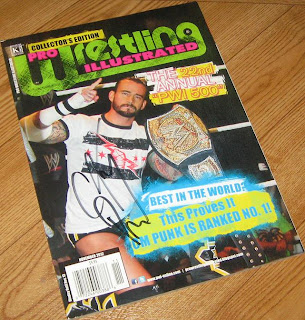 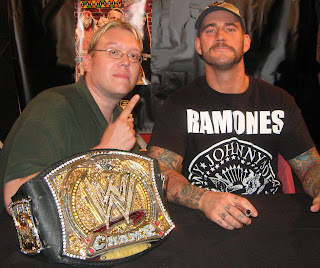