Bear Down Sunday #11 Bears vs. Vikings

The Bears are 7-3 and facing the 6-4 Minnesota Vikings.  The Bears would stand a much better chance with Jay Cutler, but if the offensive line does not improve, even Cutler won't have much luck.  Since the focus is on the offensive line, I will stay on topic and feature Tom Thayer, one of the best offensive linemen the Bears have had during my lifetime.
Thayer went to Joliet Catholic High School, but as a Mt. Carmel alum, I will not hold that against him.  He went to Notre Dame and later played three seasons in the USFL, before joining the Bears and becoming a regular on the offensive line.
Thayer was a rock.  He won't get Hall of Fame consideration like Jay Hilgenberg and Jimbo Covert, but Thayer was as effective as he was durable.  He played 8 seasons for the Bears and finished his career with one season in Miami.
He currently does broadcasting work for the Bears and I am a fan of his work.  Thayer is the Steve Stone of football analysis.  It doesn't get much better.
I am hoping all of this talk of Thayer will somehow translate into better offensive line play for the current Bears.  I know it is a stretch, but it might be the best hope we have. 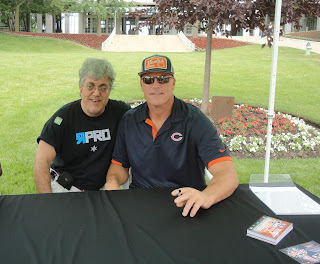