Johngy, The Ego and Big Money at Resistance Pro Wrestling

On Friday January 18 (yes, just a few days away!!), "The Ego" Robert Anthony will defend his Resistance Pro Heavyweight title against Matt Hardy at "Stay Hungry" at 115 Bourbon Street in Merrionette Park, IL.  This promises to be another great night of R Pro action.
Ego won the belt in a three way match a couple months back.  He has put on some great matches in his tenure with R Pro and the fans have really responded to him.  When he proclaims the arena as "the house that Ego built," the fans wildly cheer.  He has the look, the skills and the charisma to go a long way in wrestling.
Ego is great in and out of the ring.  JohngysBeat.com interviewed him after a match in March and at Wizard World and he was very entertaining both times, along with every other time we have talked to him off the record.
It will be interesting to see who he faces and where Ego goes in 2013.  While the rest of the year is uncertain, I know where he will be this Friday...the same place I will be...the same place you should be.
Ego is the real deal and so is R Pro.  R Pro continues to provide great wrestling entertainment and with Ego at the top, R Pro will keep getting more entertainment.  Don't just take my word though.  Come out and see for yourself.
For all of the info on "Stay Hungry" and R Pro, go to ResistancePro.com. 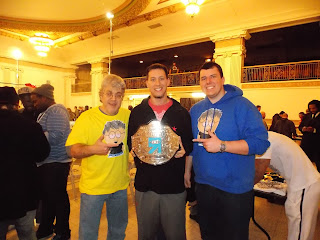 Me, Robert Anthony and Matt Parker in Chicago, IL-December 2012.
Posted by Johngy at 6:00 AM