I don't remember when I first read Funky Winkerbean, a comic strip in my local paper.  It has been in print since 1972 and I probably started shortly after that.
Tom Batiuk is the creative force behind Funky and the rest of the gang, as well as John Darling and Ed Crankshaft, two other comic strips.  I have read the strips regularly since then (although John Darling ended in 1990).  I own several of the compilation books, too.
I had the pleasure of talking to Batiuk last year at Wizard World in Batiuk's native Ohio.  This was quite a thrill for me.  Here I was sitting with the man who brought so much enjoyment to me over the years.  I almost felt like I was talking to Funky's father (which, in a way, I was).
Meeting someone after following them for so long can be tricky.  In this case, Batiuk far exceeded my hopes.  He was so pleasant and easy going.  He was free with his time and thoughtful with his answers.
Batiuk's characters have struck a chord with generations.  His characters are multi-dimensional.  Short-timers and long-standing characters all leave some sort of mark, including Lisa, perhaps the most far-reaching character.  Lisa's Legacy Fund has helped raise funds and awareness for cancer.
I hope to meet Batiuk again at some conventions this year.  It will be great to see him again and to get any update.  When I do, I will be posting all here.
Until then, please check out FunkyWinkerbean.com to learn more about Batiuk, and the rest of the cast of characters. 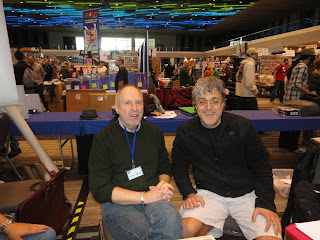