A couple months ago, Contributor Extraordinaire Matt Parker and I attended a taping of A Piece of the Game, a new television show about sports memorabilia appraisals.  Our friend Scott Beatty of AU Sports Memorabilia was one of the appraisers on the show.  We were there to support Scott, as well as to possibly get on the show.
Matt brought a signed Sammy Sosa baseball that he got at an All-Star game in Houston.  I brought along my game-used Jody Davis bat that I got from the bat boy back in 1984.  Neither of us made the cut and therefore will not be seen on the episodes taped that day.
Despite our disappointment, our day was made when Cubs Hall of Famer Ernie Banks appeared.  Banks was there for a segment, which also featured Scott as the appraiser.  We had the pleasure of talking to Banks for several minutes.  It was pretty cool.  Besides being a Hall of Famer, he is a Chicago institution!  Even Sox fan Matt was happy to meet this legend.  I think Banks is the best player I have ever met and probably the same for Matt.
Below is the picture of Matt and Banks.  You can get all of the info on watching the show including the appearance by Banks at APieceoftheGame.tv. 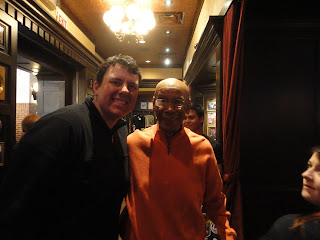