I Suffer for My Craft

As it has been well-documented here, I am a fan of Resistance Pro Wrestling.  Everyone from owners Jacques and Gabe Baron all the way down have been very good to us as people and as JohngysBeat.com.  It was been a wonderful experience.
One moment that was not so great was when R Pro wrestler Eric St. Vaughn put me in the Boston Crab (also known as the "Walls of Jericho" among other names).  I would think a guest on my WrestleBeat program would have treated me better.
My partner in crime on the wrestling scene is usually Scott Beatty.  Beatty is always looking for the edge on me and invited ESV to appear on our tubecast.  I thought the show went well, despite the two trying to wrestle the show away from me.  It can be seen at Wrestle Beat: Episode II.
After the show is when ESV snapped.  We were all just milling around, when suddenly ESV grabbed me and the next thing I knew, I was on the receiving end of the Boston Crab.
Several wrestlers have put the sleeper hold on me.  Rosie put me in a back-breaker.  Now ESV can add his name to that list.
Despite the move, I am still a fan of ESV's work.  He started as a valet of sorts early in 2012.  In January of this year, he wrestled his first match.  That is quite an accomplishment and he deserves a lot of credit for his determination, attitude and effort.
I would guess ESV has put his friends in various holds.  I know he is now putting other wrestlers in holds.  Still, I am going to say that this is the first documented instance of ESV applying a wrestling hold.  I lay claim to being ESV's first victim. 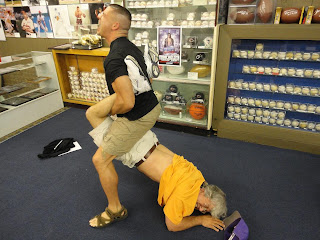 You TOTALLY had it coming!