Aniviel is a contributor to HeavyMetalNation.com.  Rather than have me write about it, do yourself the pleasure of reading Aniviel's bio here.  It's pretty funny, completely accurate and from there, you can also find all of her pieces on HeavyMetalNation.com.
In addition to her passion for music, Aniviel licks rockstars and wrestlers.  She says it is a gimmick to go with her column at HeavyMetalNation.com.  (I still have to find out how that got started, but that's for another time).  Of course, she is also firmly entrenched on the Resistance Pro scene and can usually be seen at R Pro events.
At the March R Pro show, I approached Aniviel about inducting Johngy into her "licked" club.  Notice, I wrote "Johngy," not because I write in the third person, but because I was actually referring to the Johngy logo on my shirt.
I am neither a rock star nor a wrestler, and therefore did not feel that I deserved the licking treatment.  I did think Johngy stood a chance.  Besides, it was easier to ask for a lick of the Johngy cartoon face than of my own face.  How does one even go about asking for a face lick?
Still, I was nervous about asking for the lick.  Aniviel is very cool though.  She eagerly agreed to lick Johngy and that moment was captured and is shown below.
How cool is that?  I have joined the many rock stars and star wrestlers in her lick club.  Maybe I should write that Johngy joined that list.  Heck, either way, it is logged in!  I am very proud of this moment and achievement.
Thank you, Aniviel!  You rock!
I encourage everyone to check out Aniviel at HeavyMetalNation.com.  You won't see Johngy on there, but you see a lot of heavy metal fun! 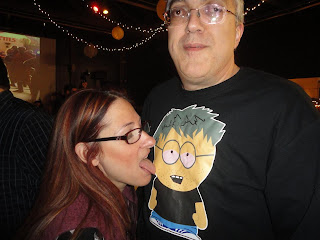