C Red Kicks for a Cure

At Resistance Pro Wrestling, C Red calls the action with Zach Thompson.  He also gets involved in the action by managing the tag team known as Da Soul Touchaz.  C Red is very entertaining in either role.  This Saturday, June 29, C Red will be in another role, that as a kickballer.  More precisely, he will be one of thousands who will be supporting Kicks For a Cure.
Kicks for A Cure is an annual kickball tournament held each summer at Grant Park in Chicago.  Kickball teams compete and raise money to help fight cancer and support Receptions for Research, the Foundation started by former Chicago Bears and current Carolina Panthers tight end Greg Olsen.  Olsen's mother survived her battle with cancer.
C Red will be participating on a team with other R Pro stars including Barry Ryte and Ashton Vuitton.  His excitement about Kicks For a Cure was evident when he told me, "I'm involved because I know this is a great cause. Helping people is something that I feel strongly about and raising money is one way to help. I hope others will support Resistance Pro, the Chicago Bears, Greg Olsen and donate to this cause! I'm proud that I can help out for a great fun day!"
I have met C Red many times and have always been entertained by him.  Saturday, I will see him once again.  I am sure I will be entertained, but I will also be very proud to know him and to help promote and cover this great event.
For more info on this great event, check out KicksForaCure.mytmc.com, ReceptionsforResearch.org and the Kicks For A Cure Facebook page. 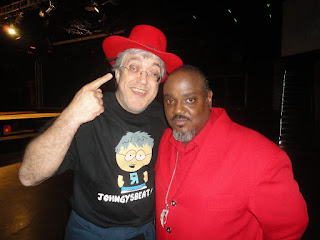