Dave McKay first appeared on a baseball card in 1976, which happened to be the first set I ever collected to completion.  McKay was part of a quad-pictured card of "1976 Rookie Infielders."  That immediately put him on my radar.
The next season, he appeared by himself on a Toronto Blue Jays card.  Oh those mysterious Blue Jays.  They were new and mostly airbrushed.  They were quite mysterious and interesting.  This really cemented McKay as a guy I followed.
McKay later was on those Oakland A's teams, which I always seemed to see at Comiskey Park playing the White Sox.  I am pretty sure I got McKay's autograph on a scorecard one time.  Oddly, I am usually very strict about locating any of my autographs, but that page escapes me.
Anyway, fast forward 30 or so years and McKay joined the Cubs coaching staff.  Finally, he was on my team.
I met and interviewed McKay in Houston last season.  He is the kind of guy I wish I could get for a longer session.  He played eight seasons and has coached for many years since, the bulk being with Tony LaRussa.
I think McKay would have great stories and interesting insight.  He has played and coached with many Hall of Famers and notables, like Rod Carew, Billy Martin, Mark McGwire and more.
I semi-broke the journalistic code by asking McKay for a picture "for the story."  Okay, it was mostly for my collection, although I did use it in the story.  McKay was very cool about it.
It's moments like that when I really think how cool all of this is.  Hopefully, this season, I will add a few more of my childhood favorites to my interviews list. 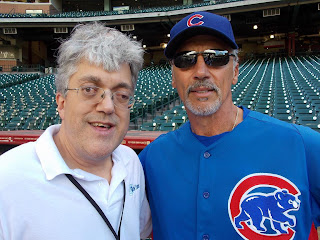 Glad you got the pic!