Frehley was Aces at Days of the Dead

Kiss was my first favorite rock group.  Their album Rock and Roll Over was the first album I ever bought.  Oh man...that was one cool album.  I studied that album cover and read the liner notes for hours.  Even now, I rank that cover as one of my all-time favorites, and not just because of nostalgia.
I have given my opinion on Kiss and their place in musical history.  They are Hall of Famers.  Don't give me the makeup argument either.
I almost met Ace Frehley in 2011 at Days of the Dead, but his line was insanely long.  I really tried, but time constraints prevented me from meeting Frehley.  Heading into the 2012 Days in Indy, I figured the situation would be the same and it was.
Sometimes though, being a member of the media has its privileges.  At the end of one of the nights, a few of the celebs were invited into meet Frehley and I was also given the opportunity.  This was so cool for many reasons.
First, obviously, I was stoked that I was going to be able to meet Frehley without waiting 4 hours in the line. Second though, it was fun to watch Frehley and other stars interact.  I was scheduled to interview Felissa Rose right after meeting Frehley and who should "cut" in front of me?  Ms. Felissa herself!  I also saw JohngysBeat.com favorite Traci Lords pose with Frehley.  It was like seeing various worlds colliding.
Meeting Frehley was super cool, as well.  I asked him how he was doing and how long the day was.  He was pretty low key, but responded that he was great and how could he really complain about the line or anything else.
You might think this is a no-brainer, but not really.  Many stars do voice their complaints.  Many stars let you know how tiring these appearances are.  Don't get me wrong, I do not feel sorry for any celebrity making cash signing and posing and I can see how tiring it can be, but Frehley's attitude was exactly what you would want in any celebrity guest, let alone the big draw of the convention.
Overall, this was one of the highlights of the convention.  It was great to see that one of my musical favorites was very cool.  It also says a lot for the Days of the Dead con and for Adolfo Dorta who runs it.  It isn't just coincidence that his guests are all very fan-friendly! 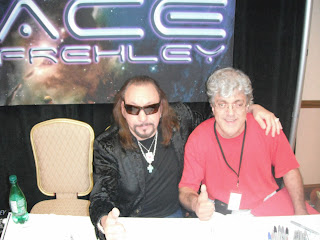 Wow, really cool, to meet a favorite band member from years ago!