Getting Fishy with Charlie the Tuna

During the course of writing this blog, I have run hundreds of pictures of me (or my friends) with various celebrities.  I have also run quite a few pictures featuring mascots.  Some people have suggested I start a Mascot Monday feature (what?...and move Friendly Encounters?).  I do love the occasional mascot phto, but there really usually isn't enough of a story to justify a regular feature.  Charlie the Tuna makes the cut though for several reasons.
I love tuna.  I gave up beef years ago and tuna has taken a spot in my regular food rotation.  This might seem a bit odd though.  Since I enjoy eating tuna, why would Charlie like me?
This brings me back to the several reasons.  Charlie is an iconic character.  He has been the spokestuna for as long as I can remember.  As a kid, I never understood why Charlie would want to be picked by Starkist Tuna.  Wouldn't the instincts of survival push him away from Starkist?
Maybe I thought too much as a kid.
This picture also reminds me of the Half-Marathon completed by my niece Sam and my nephew Matt.  I am so proud of them for doing the race.  They pushed themselves hard and their hard work showed as they crossed the finish line in excellent times.
I promised then I would run one with them.  It looks like my goal is now going to be the Chicago Half-Marathon in July.
I have several months to train, which is good because I have not run that distance since completing my last Chicago Marathon about ten years ago.
One little picture.  A man and a mascot.  So many odd thoughts.  Thanks for joining my voyage. 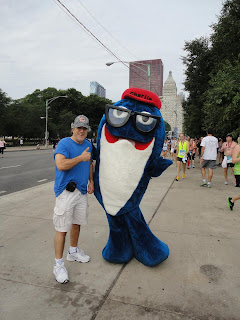