I always liked Tammy "Sunny" Sytch.  When she burst on the wrestling scene in the early 90's, she essentially became the original diva, recreating a woman's role in wrestling.  She was young, beautiful, entertaining and she could work the mic like no other woman.
Tammy has had her share of good and bad times in wrestling and in life.  In both, she kept coming back.  Like her or not, she is a survivor.
I happen to still like Tammy.  I have met her several times over the last few years.  I have interviewed her a couple times, too.  She is an absolute pleasure.
I know she has her detractors, but I have never seen her be anything but super to her fans at any appearance. In fact, she seems to have a knack for remembering many of our names and greeting us right away.
One time in South Bend, after enduring a major storm, she arrived late (but she arrived) and immediately gave me a big hug, stating it was nice to see a familiar face.  About 100 or so people stayed late just to meet Tammy and everyone walked away satisfied.
Earlier this year, Tammy went through some personal problems, but once again, she appears to have come back stronger and better than ever.  It looks like Tammy is doing some personal appearances again and I only hope Chicago (or relatively close) will make it on to her schedule. 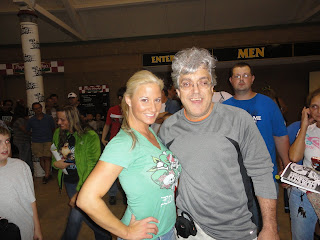