I first saw Eugene Cresto many years at a wrestling show (PCW, I think).  Since then, I have seen him at many other events.  Eugene meets a lot of wrestlers.  I mean A LOT of wrestlers.  In fact, if he had Eugene's Beat, he would far surpass Johngy's Beat in wrestling encounters.
Plus, he meets big name wrestlers in bunches at a time.  I am sure he probably goes to airports or hotels to meet the WWE or TNA talent in large numbers.  Wherever it is and however he does it, he does it well.
I have no problem admitting he has met many people I have not met.  If it was even close, I would be petty enough to be competitive, but it isn't close.  I have no idea how many WWE and TNA stars he has met, but I know it is a large number.
One big name he recently met was Paul Heyman (aka Paul E. Dangerously).  I have been a Heyman fan for many years (dating back to his big phone WCW days).  Heyman is a wrestling genius.  Unfortunately, I hacve never met Heyman.  He is definitely on my Top Ten list of wrestlers I have not met.
Aside from a random convention where I could meet a few big name wrestlers at a time or independent wrestling shows where I can meet a lot of indy stars, I don't get a chance to meet a whole lot of big names in one shot.  Eugene is the master and I bow to the master.
I would also give an open invitation to Eugene to submit a guest column here.  (If you can't beat 'em, join 'em.)  Sure, Eugene can ,ake occasional appearances on Johngy's Beat.  Hey, maybe it will keep him from creating Eugene's Beat and beating me at my own game. 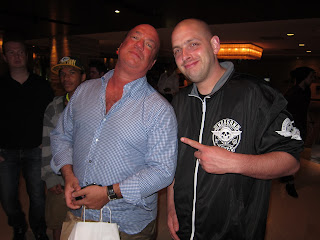