There are so many things I like about today's feature.  Glen Rylko is a Chicago guy.  I first met Glen at a Resistance Pro Wrestling event, although I am pretty sure we had crossed paths at many events prior to that one.
Glen is a sports and wrestling fan.  He has met many stars, but I chose to feature him with Dennis Lamp, former pitcher on both sides of Chicago as well as elsewhere.  Glen has met bigger stars, but Lamp is perfect for this feature.
Coincidentally, I was at the same game where Glen met Lamp.  How did I miss that photo opportunity.  I would have loved to have met Lamp.
Lamp debuted on the 1977 Cubs, right when I was really getting into baseball.  I liked the idea of following a guy right from the beginning and I picked Lamp as one of those guys.  In 1981, he was traded to the White Sox (a rather rare occurrence back then) and settled into the role of a long relief guy.  He was an important part of the 1983 AL West champ White Sox, the first Chicago baseball team to reach the playoffs in my life.
Lamp left Chicago after that season and pitched nine more seasons, including a ridiculously good 11-0 1985 season with the Toronto Blue Jays.
Lamp is wearing the 1983 Sox cap and Glen is wearing the 2013 Stanley Cup Champions Blackhawks shirt.  Those are two great moments in Chicago sports history.
As I wrote, there are just so many great things about this picture.  I really appreciate Glen for sharing the moment.  I also appreciate Glen for coming up and introducing himself at the R Pro event.  Hopefully, in the future, I will have more pictures of Glen with stars he has met. 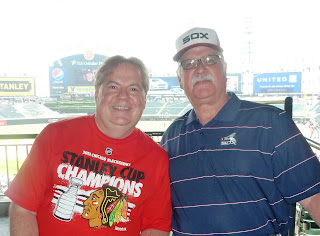