This is a weekly feature which highlights friends who have met celebrities.

I first connected with Josh Watko when I stumbled upon JW's Wrestling Memorabilia, his outstanding website.  Josh's site has reviews, lists, pictures, memories and meetings with wrestlers.  He is a great fan and a very knowledgeable one, which makes his site so enjoyable.
Josh's site is about wrestling, but Josh is not limited to just meeting wrestlers.  He recently sent me his recap of meeting two stars of tv's The Munsters and I now share it with you.

I usually limit myself to traveling solely for wrestling conventions and fanfests.  That being said, if a classic television star is going to be nearby and the stars align, I often can't resist giving it a go.  This is what happened when Pat Priest and Butch Patrick of "The Munsters" appeared at the Monster Bash Conference in Cranberry Township, PA.
I grew up watching "The Munsters" as well as "The Addams Family."  Both goofy, typical '60s series, but still the kind of entertainment that will take your mind off of everything else for thirty minutes or so.  I'd heard of the Monster Bash Conference before, but none of the previous celebrity appearances that I knew of really interested me.  In December of 2012 I saw the flyer advertising the mini Munsters reunion and it did intrigue me.  Although I had met Mr. Patrick before, Pat Priest was completely new for me.  My mind also flew to the amazing Munsters action figures that had been released not long before.  While Herman, Lily, and Grandpa came packaged separately, Marilyn and Eddie were sold in a two-pack.  What better item to get signed?  After receiving the ghoulish figure twosome for Christmas, my mind was made up.
The show was only about forty minutes from my home, which didn't make it feel as if I was going out of my way for this meet.  Upon arrival, I could tell that the Monster Bash show is the kind of gathering that any fan of vintage sci-fi and horror (think '40s thru '70s) would love to find.  Though I really had no interest beyond meeting the Munsters, I appreciated how much effort went into the show for the attendees who look forward to these three days for the entire calendar year.  Film viewings, live entertainment, celebrity appearances, plenty of merchandise, and an overall "hands-on interactive" feeling seems to set it apart from the "Take-my-money-here's-your-autograph" feel of so many shows.  You could tell that the large majority of attendees at this event feel like family.  With the many warm greetings I received in my hour or so spent, I felt very welcome as well.
Conveniently, the celebrity tables were set up in the main hallway after turning the corner from registration.  Butch and Pat had yet to arrive, but their tables were fully set with their photos for sale, and a banana was also present on each.  Spotting the banana made me think that both would soon be making their way down, so I decided to check out the vendor room.  A short jaunt was all it took.  I popped my head out into the hallway to see the bananas being devoured by the Munster legends.  Pat Priest was first on my agenda.  I was greeted with a warm smile and handshake.  Pat may have been the second Marilyn Munster, but in my opinion the true Marilyn.  Beverley Owen played the character for the first few episodes, but most Munster Memories are filled with Miss Priest.  She is also the Marilyn as portrayed on the action figure.
Any autograph was just $20 from Pat, and photos with her were free.  I have a previous photo with Butch, so a photo with Pat was my goal.  The fact that it was included in the price of the autograph was even better.  She went to great pains to make sure that the photo came out perfect with good lighting.  It's the little things like that which prove that you have a celebrity that cares about the fan experience.  Pat was elated to see the figure and asked me if I had bought it at that show.  She does not have one of her own.  Sadly, the vendors at the show only had the other cast members for sale or a special boxed set of all five characters that are colored black and white.
Butch Patrick was next, and also charged $20.  Surprisingly, he informed me that he was also including a photo op with the price of the autograph, so I decided to ask for a "Munster sandwich" photo of the two with me in the middle.  Both were happy to oblige, and I almost look like Herman in the photo with how I towered over them.
Overall, it was a very satisfying experience.  If another star that I had an interest in meeting were to appear at a future show, I would definitely consider attending Monster Bash again...even if, to me, it's really "Munster Bash."

I really appreciate Josh sharing his celebrity encounters.  Some day, I hope to meet the man behind JW's Wrestling Memorabilia.  Now that would be a friendly encounter! 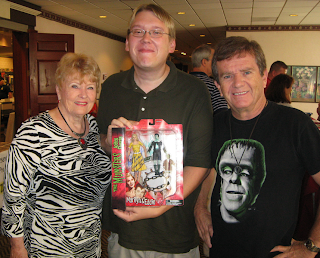