Last winter I did a few online pieces for the Patch about the St. Demetrios youth basketball team featuring Louie's sons and his nephew.  Louie and i talked about me doing some coverage of the Little League team he would be coaching this season and a Paper Marlin was born.
My older readers will recognize that as a take on George Plimpton's great book, Paper Lion.  Plimpton was a writer who practiced with the Detroit Lions and actually took some snaps at quarterback during an exhibition game.
My goal in becoming a Paper Marlins was to provide a little coverage of the Lincolnwood Marlins, but I also admit to having a personal reason, too.  Due to health reasons, I never played Little League baseball.  I viewed this as a chance to partake in the Little League experience as best as I could at my age.
Louie and his coaches (Bill Pabst and Harry Konstantopoulos) immediately made me feel like part of the team.  The kids also welcomed "Coach John."  I took part in some practices along with my "teammates" and actually learned a few things about playing.  During games, I coached first base a few times and warmed up the pitcher at times, too.
Of course, me actually playing wasn't going to happen.  I might have been bigger and stronger, but as Kramer once said, "We're all on the same skill level."  Well, to be honest, all of the kids were probably better than me.  We all had fun with the possibility that I would actually play though.  Okay, I admit that a teeny part of me actually wanted to log in an appearance in a game.
In the end, I never got into a game.  In the end, the Marlins won the championship.  Most importantly, in the end, I was a part of a Little League team.  I had lived the Little League experience that I wanted for all my life.
I want to publicly thank the Patch for allowing me to write the Paper Marlin series.  I want to thank the Lincolnwood Little League, Coach Louie and the Marlins for making me feel welcome and a real part of the team.  This was a blast for me. 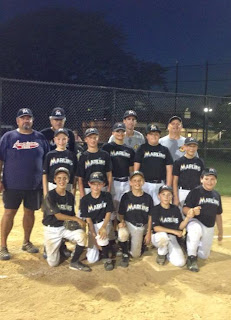 The 2013 Champion Lincolnwood Marlins, including me in Lincolnwood, IL-July 2013.
Posted by Johngy at 6:00 AM

Congratulations on a great season!