Today is the perfect day to run this Friendly Encounter between Noah Martin and Alli Alberts of the Chicago Bliss.  I saw this picture on twitter and asked Noah if I could run it here.  I support any press and love for the Chicago Bliss.
The Bliss beat the Philadelphia Passion 34-18 to become the 2013 Legends Football League champs!  Coach Keith Hac was named LFL Coach of the Year, while quarterback Heather Furr was named LFL MVP.
Furr has such amazing chemistry with her receivers, including #1 Alli Alberts.  I have met both women and they are just super cool.  Actually, the whole organization has been super cool to me.  They deserve all of the praise they get.
Congratulations to the Chicago Bliss!  Congrats to Noah for getting a picture with a member of the LFL champs (I love writing LFL champs).
Noah ran into Alli at the Citizens Bank Arena.  Noah said, "Alli kicked ass Saturday night and congratulations to Chicago Bliss for their win against The Seattle Mist!!!"

Now that is a great fan!  Welcome aboard the Bliss bandwagon, Noah!  I hope you enjoy the ride as much as I have enjoyed it. 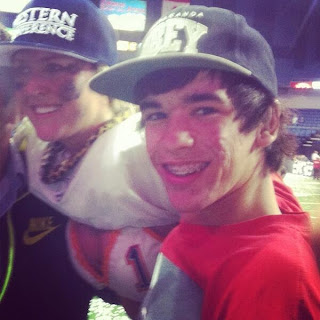 Alli Alberts and Noah Martin in Ontario, CA-August 2013.
Posted by Johngy at 6:00 AM