What's with Al Snow?  Every time I see him, he punches me in the face.  On second thought, maybe it is me.    Maybe I elicit that type of reaction.
Actually Snow punches me, because I ask him to punch me (although he seems to do it with quite a bit of glee).  I think Snow started this tradition.  I had met him several times and one time he just said we should have some fun.  Who am I to argue with Snow?  Thus the face punch was born.
One time, I was looking at the polaroid we took and a woman freaked out a bit that he actually punched me.  I guess she was not in on the joke.  I told Snow about it and he had a good laugh.
Snow is a great guy.  He was a successful wrestler, although he never attained true "main event" status.  I think the wrestling promoters missed out on Snow.  The man has humor, charisma and ability (just ask Mick Foley).
Regardless, Snow is great at appearances.  He is always willing to have fun with the pictures.  I have a few face-punch shots though.  I think next time, maybe I should get a "Head" shot or some other form of violence.  I am sure Snow will cooperate. 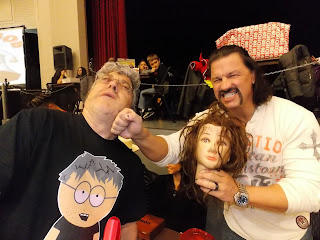