The Chicago Bears are 3-1 and hosting the New Orleans Saints who are 4-0.  This is a big test for the Bears.
Today, I am featuring Walt Housman, former member of the New Orleans Saints.  Housman is perhaps better known as Coach Hous, Assistant Coach of the Chicago Rush.
I got to know Housman a bit while I covered the Rush last season.  I really appreciate everything the Rush did for me and Housman was a big part of that.  He made me feel welcome and comfortable at every practice.
The first instance caught me by surprise.  I walked over to the side boards and Housman greeted me.  Then a few minutes later, he made some comments about the defense directed to me.  He actually was giving me a little insight into the practice.
He quickly obliged when I asked for an interview after practice and he gave me more than I usually get.  We talked about the Rush, fishing and more.  It was a fun interview and can be found at On the Beat with Walt Housman.
More relevant to this story, Housman is an excellent defensive coach.  He has done a great job with the Rush.  Just like with Coach Bob McMillen, Coach Housman has had to endure uncertainty and confusion over the last two seasons.  Somehow through the muck, the team made the playoffs last season.
I will be channeling Housman's defensive spirit as the Bears take on the Saints.  They will need some tough D to win this game.  I hope they take a page (or 2) out of Coach Housman's book. 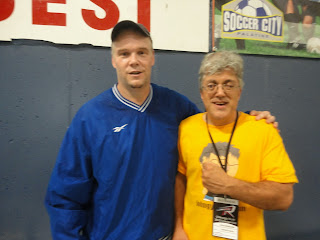