The Chicago Bliss won the 2013 Legends Cup and are the 2013 Legends Football League Champions!
I have previously written that here and on other sites (like LFL360.com, for instance).  Still, it bears repeating.  So I will.
The Chicago Bliss won the 2013 Legends Cup and are the 2013 Legends Football League Champions!
It bears repeating because Coach Keith Hac and the entire organization are great people who worked very hard to accomplish this feat.  Unfortunately, the Bliss get neither the respect nor the recognition they deserve.
My role at LFL360.com was to cover the Bliss.  My coverage can be found at John's LFL360.com Bliss pieces.  The LFL 360.com has a lot of talented, hard-working people who are trying to report and promote the LFL.
Recently, I talked to Coach Hac about the off-season and the 2014 season.  Hac was his usual calm and confident self.  That story can be found at 2013 Coach of the Year Keith Hac.
Once again, I found myself really liking Hac and wanting to do whatever I could to promote the Bliss.  It really is just that much fun and the people involved are awesome.
I hope this piece serves as both a "Thank You" to the Bliss and a promo for them, as well.  Coach Hac deserves both, as does his team!
I encourage everyone to check out LFLus.com to learn more about the Bliss and the LFL.  My interviews with Coach Hac and the Bliss players can be found at the JohngysBeat.com Chicago Bliss playlist on YouTube. 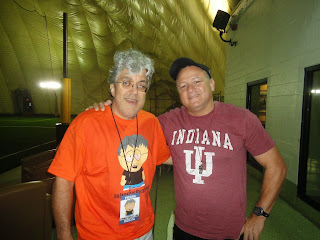 Congrats to the team! Congrats to you for doing a great job in reporting their success!