The King, Big Money and Johngy

Jerry "The King" Lawler has had a fascinating wrestling career.  He has held over 150 titles in his 40+ years in the ring, although many of those titles were won in the Memphis area or at least in the south, where Lawler ruled, title or not.
Lawler achieved some mainstream notoriety many years ago when he was involved in a much-publicized feud with the late comedian Andy Kaufman.  There is some debate whether the feud was legit or staged.  Honestly, it is hard to tell and I really don't know.
Lawler had a heart attack on live television earlier this year.  Fortunately, he has made a complete recovery.  Actually he looked fantastic when Matt and I saw him at a PCW wrestling event.
Lawler brought his crown and Matt got to hold it for the picture.  I still think Matt should have gone for it, by putting the crown on his head.  Now that would have been a cool photo.  Still, I am pretty sure this is the only photo I have ever posted featuring a (non-beauty pageant ) crown. 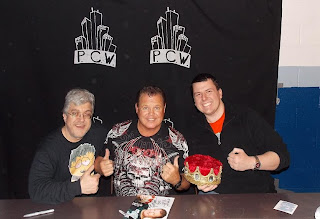 Jerry Lawler, Matt Parker and me in Midlothian, IL-Spring 2013.
Posted by Johngy at 6:00 AM