Chazz Moretti and Mancow Muller might debate which one is the bigger celebrity.  Actually, they are both celebrities.  For this piece however, Chazz is my friend and Mancow is the celebrity who he met.
Chazz has done more than just meet Mancow.  He has appeared on Mancow's tv show several times.  I have not seen the ratings, but I heard that Chazz's appearances always cause a big spike up.
They are very different men, yet they are similar, too.  Both are larger than life.  Both have a big place on the Chicago media scene.  Both have a huge fan following.  Both men have surpassed just being celebs.  They are more like mini-corporations (like the Moretti Agency).
I can only imagine what it is like when these two big wigs get together.  I can only imagine because I have not been privileged enough to witness it yet.  It is one of my goals to be in studio (but not on the actual show) when Mancow brings in Chazz.  Let this serve as the opening volley of my campaign. 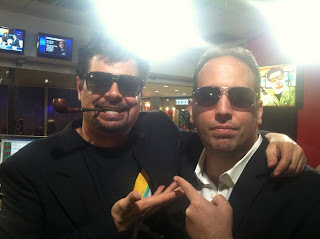