I first met Rob Myers when I attended a POWW (Purely Obsessed Wrestling World) event.  Rob is the photographer for POWW (and other companies).
Rob was very helpful as I stumbled my way through photographing the events for my wrestling coverage on JohngysBeat.com.  He never asked for anything and often went out of his way to lend me insight into where I should be for the best shots.
I see Rob occasionally at wrestling events and I follow him on Facebook.  The man is everywhere, photographing everything.  If you are a wrestling fan or a model in the area, chances are you have seen him.
Today, I am turning the tables on the man I call "Paparazzi" (okay, I am not original).  Despite all of his photographs, I don't see many of Rob and celebrities.  He apparently likes being behind the camera better.
I did find on.e cool picture of Rob.  He posed with Roddy Piper, one of my all time favorites.
Rob has obviously met many celebrities, but one who really intrigues me is Rowdy Roddy Piper.  Rod and Rob.  Piper and Paparazzi.
Actually, it doesn't matter much who is in the picture with Rob.  It just matters that I am featuring Rob today.  Rob is a great guy and a fantastic photog.  If you see him, tell him Johngy sent you to bug him.  Be prepared though, Rob has a quick and somewhat evil wit.  It's part of his charm. 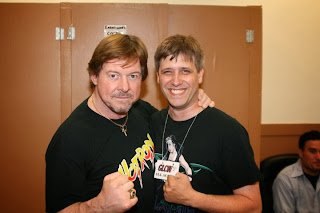 If you were as ugly as Rob is, you would stay "behind" the camera too!

That being said the only "EVIL" wit that Rob might have was prolly stolen from the Castle!