This is a regular series which attempts to combine my lifelong passion for bubblegum cards with my semi-professional interest in celebrities.  Hockey season is heating up and baseball season is just starting.  Today, I feature baseball players in hockey jerseys.

Mike Matheny's connection to the St. Louis Blues comes from his two successful stints with the St. Louis Cardinals.  Matheny had endeared himself to St. Louis fans for his 5 season run there as an excellent catcher, but his two seasons as a manager, which include 2 Manager of the Year awards and one NL pennant, have already surpassed his player accomplishments.  Unfortunately, Matheny's playing career was cut short due to concussions.  With the way he played, a Rams jersey might be appropriate for his next Celebrity Jersey Card! Mirroring Matheny's pose, Justin Morneau is representing his homeland's Vancouver Canucks.  Morneau has played for the Minnesota Twins and the Pittsburgh Pirates.  I am sure he played some hockey in his youth.  Perhaps there is a picture of him back then in a jersey of some sort which would make a very interesting Celebrity Jersey Card! 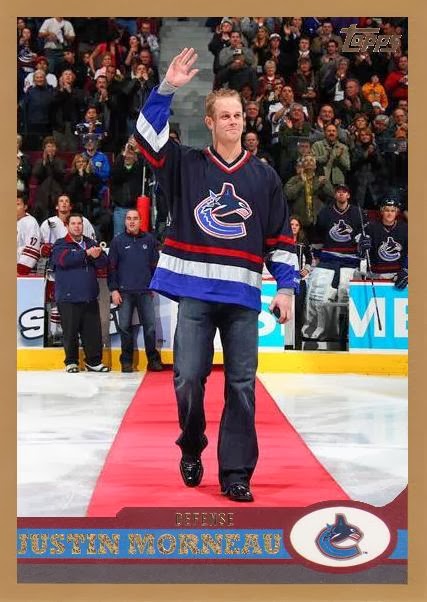