My sister had tried to see Taylor Hicks a few times in Las Vegas   He cancelled his shows for one reason or another.  Jean kept trying though.  I am sure it had to be hard to persuade Scott to return to Vegas.
Actually, we all tried to see Hicks on my last trip to Vegas earlier this year.  I even attempted to setup an interview with him.  I was declined by his press person.
Ordinarily, I would write about this snub and follow his career since then to determine if he has hit hard times, like a lot of the people who have previously snubbed JohngysBeat.com (I am talking to you Bobby Jenks etc).  This time though, I will stay positive.  This is about Jean finally seeing the leader of the Soul Patrol.
On their latest trip, Jean and Scott did see Hicks and Jean got a picture with him after the show.  (She is always looking out for me.)  For the record, Jean and Scott also enjoyed the show.
In summary, all is positive.  Jean finally sees Hicks in concert.  JohngysBeat.com gets a fun Friendly Encounter.  Hicks gets himself on JohngysBeat.com.  Scott gets...wait a minute.  What does Scott get?
He lost a "reason" for going to Vegas.  He lost time at the casino.  He didn't get on JohngysBeat.com.  Hmmm.
Truthfully, Scott gets the love of Jean and really, that should be plenty for him.  Plus, I am quite sure he will find another reason to head to Vegas. 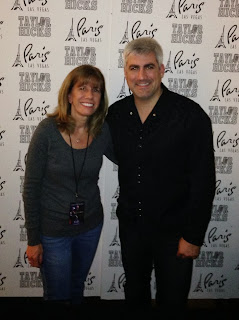 Jean Parker and Taylor Hicks in Las Vegas, NV-November 2013.
Posted by Johngy at 6:00 AM

I truly enjoyed his show. Even Scott said it was good. I hope he has a successful career in Vegas so we can go see him again!!