Mark Bodek lives in the Washington DC area.  He is a sports fan and naturally a fan of the Nationals and other teams of that area.
The Nationals arrived in Washington DC in 2005, after leaving Montreal as the Expos.  I wonder what it would be like to be without a sports team in one of the four major sports.  I also wonder how it would be to suddenly have a team.  Would it matter if the team was an expansion team or a relocated team?  Yes, these are the things that haunt me.  Fortunately, I don't think Mark has those issues.
Even if he did, I wouldn't feel sorry for him.  He knows Terri Runnels.  He works with Terri Runnels.  He represents Terri in booking appearances and other things, such as occasionally auctioning various pieces of her wrestling memorabilia.
Terri is one of my favorites.  I have interviewed her, she has done a JohngysBeat.com promo and she wore my shirt.  That's all pretty cool, but unlike Mark, I can't say I really know her.
Mark has me there.  He also has me slightly on sports teams right now.  The Wizards knocked the Bulls out of the NBA playoffs.  The Nats are doing much better than the Cubs, but the Bears were much better than the Redskins and the Hawks were better than the Capitals.  The edge goes to him for eliminating the Bulls.
So he gets sports teams and Terri?  How is that fair?
He isn't satisfied though.  He piled on by meeting several players at a Nationals event.  He even posed in the dugout with some (like like Bryce Harper and Kurt Suzuki).
What's with Mark?  Is he trying to raise my ire?
Actually, Mark is a good guy and has helped me on occasion connect with Terri.  I like both Mark and Terri.  Okay, I like Terri more, but I digress.  In either case, you can reach Mark on all matters related to Terri at TheTerriRunnels.com.  Tell him Johngy sent you.  Maybe he will invite me to dinner...with Terri! 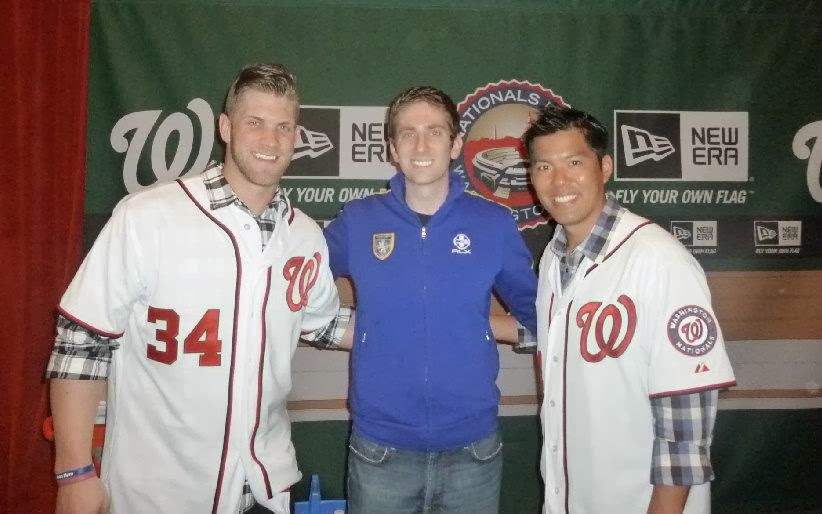 Bryce Harper, Mark Bodek and Kurt Suzuki in Washington, DC-January 2014.
Posted by Johngy at 6:00 AM

Mark is a lucky guy. Surprised Suzuki wore a Nationals jersey this past January... since he had just signed with Minnesota in late 2013.