I met Glen Rylko at a Resistance Pro Wrestling event.  Glen and I share a mutual interest in wrestling and celebrity conventions.
Today's picture is from neither of those, however.  Glen met actress Joan Cusack at a charity event.  Earlier this year at the Dash for Detection for Pancreatic Cancer.  Joan's father Richard died from Pancreatic Cancer.
Chicago native Joan is one of my favorites, as is Glen.  He always takes a few minutes to chat and catch up at every event.  Glen is a great fan of wrestling.  He knows his stuff and has some really cool memorabilia.
One of the things I really like about Resistance is meeting people like Glen.  He's a good guy and always fun to see.
Next year, I want to do some of these events.  The Marathon this year is keeping me from doing shorter runs.  Glen looks like he had a ball.  How could he not?  It was a great cause, he met Joan and he was surrounded by a sea of purple.  That sounds good to me. 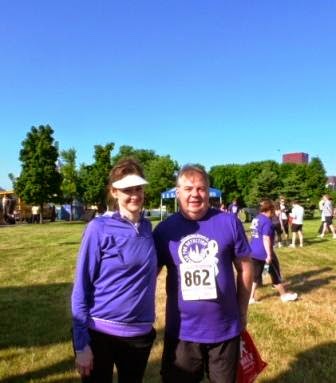