Athletes get trading cards.  Why not celebrities?  At least celebrities wearing athletic jerseys should get cards.  I am doing my best to create cards for jersey-clad celebs.  Today, I salute the Super Bowl participants.

Television personality Evelyn Lozada was born in Brooklyn.  The star of tv's "Basketball Wives" dated Antoine Walker for years.  She was married to NFL's Chad Johnson and is in a relationship with MLB's Carl Crawford.  (She needs to date a hockey player to complete that Grand Slam.)  None of that explains her New England Patriots Celebrity Jersey Card though, but who really cares?  If not for the new uniform, I would swear the #85 was for Dennis Wirgowski (one of my childhood favorites). 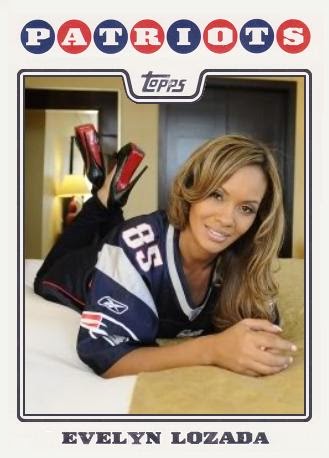 Hope Solo's Celebrity Jersey Card (her second actually) is more easily explained.  The native of Washington and star goalkeeper for the Seattle Sounds was one of the 12th Man Flag-raisers at a Seahawks game.  That all comes together to make a great card.  I made her a kick returner, because I figured she was always on the receiving end of kicks and this way she could actually do something with the ball other than just stop it! 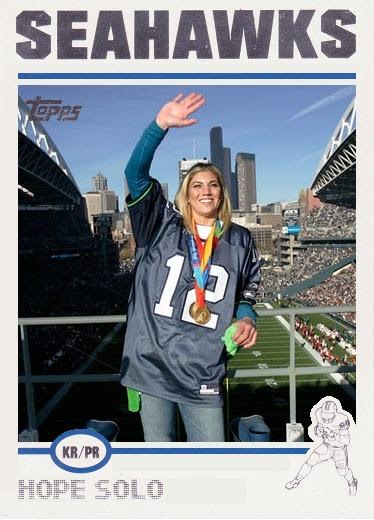 She's wearing #85, or in Spanish "Ocho Cinco". That was Chad "Johnson"'s uni when he played for the Patriots.

Hey John. Did you see that Topps stole your idea about celebrities for their "First Pitch" inserts? I'd sue.

Hackenbush-Really? That is too funny. I might have to address that issue in the near future.