Cards That Never Were is a recurring series which attempts to correct sports trading card omissions over the years.  It is a concept I borrowed from far too many others to mention, but I thank them all.

I grew up a fan of the Chicago White Sox.  I loved those red and powder blue and the red pinstripe uniforms.  The 1976 season was the last time they wore those uniforms.  The 1976 Topps set was the first complete baseball card set I ever bought.  All of this combines to make this team very special to me.
The 1975 White Sox used 20 pitchers, 10 of whom were given solo cards by Topps for the 1976 set.  Stan Bahnsen appeared with the Oakland A's.  Jack Kucek appeared with three others (non White Sox) on a "Rookie Pitchers" card.  Additionally, Clay Carroll, who was acquired after the 1975 season, was given a Traded card in the set.  That leaves 9 1975 White Sox pitchers who were deemed not worthy of 1976 cards.
I could not have that many omissions from a team that meant so much to me.  I found workable pictures for 6 of those pitchers and the creations are below.
Lloyd Allen finished his 7 year career with 1.5 seasons with the Sox.  Earlier in his career, Allen was part of a trade that saw him cross paths with old favorite Rick Stelmaszek.  Allen was purchasd by the St. Louis Cardinals in August of 1975, but did not make it to the majors with them, which does justify Topps not including Allen.  Actually, his 3 games with the Sox probably justifies their decision, too.  Still, I will use this as a "Career Finale" for Allen. 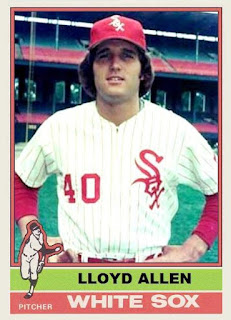 Ken Kravec started his 8 year major league career with 2 games in 1975.  He would end up pitching more post-1975 seasons than all but two other omitted pitchers. 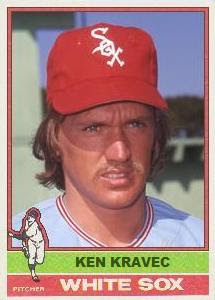 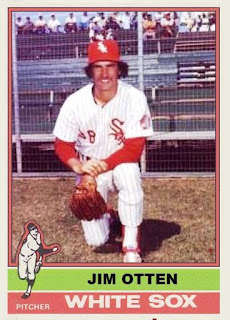 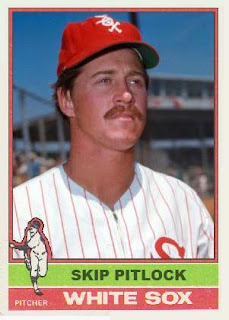 Cecil Upshaw's 10 year career started with one game for the 1966 Atlanta Braves.  In 1967, he shared a card with another Braves prospect, but then had solo cards through the 1975 Topps set, plus a Traded card in 1974.  He was traded to the Sox for Eddie Leon (another old favorite) after the 1974 season.  His 29 games with the 1975 Sox would be his last in the majors.  Since the Sox released him in March of 1976, he could have been in the 1976 set, but Topps might have thought he was done by then. 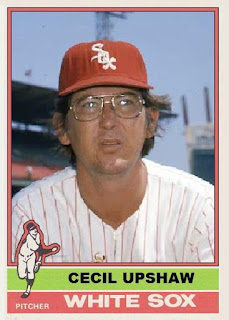 Pete Vukovich won the Cy Young with the Milwaukee Brewers in 1982, but he started his career with the 1975 Sox.  His 4 games were just not enough.  His post-1975 career would be longer than all but one other of the omitted. 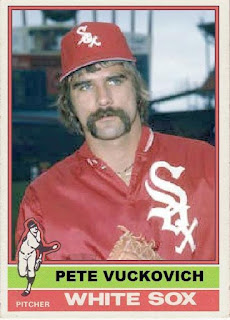 These creations leave 3 players MIA.  Tim Stoddard (who pitched the longest post-1975), Bill Gogolewski and Chris Knapp remain in limbo.  Gogo had a card in the SSPC set I could have used, but I don't like using other cards to make these cards.  Rest assured, I will continue to seek out pictures of these pitchers in those cool Sox uni's to given them their rightful 1976 Topps card.
Posted by Johngy at 6:00 AM

Very nice creations, way to go!
They look as good or better then the original card set.
Can I ask, where do you find your pictures?

Thanks for the kind words and for stopping by.
I get the pictures by scouring Google images and sometimes even Ebay. Some of the pictures come from unused Topps pictures which can surface online. Some are just random pictures I find. I am still looking for a few players from that team. I am also looking for longshots like Eddie Leon with the Yankees (he played 1 game).