Today is a unique Friendly Encounters.  My friend, "the Evil Zebra," is pictured with musician Dr. Hook.  That isn't all that unusual, though.
The different part is that I have no idea when or where the photo below was taken.  Apparently, EZ doesn't know either.
It is strange, but understandable, as I would learn.  I contacted EZ and he stated that he met Dr. Hook many times and who knows the specifics of this picture.
As a refresher, EZ is an east coast friend who was once a referee in wrestling.  I am sure he was a lot of other things, too.  He has mingled with many celebrities, as I have shared here over the years.This guy was a better version of Johngy, pre-Johngy and pre-internet.
Bringing this full circle, I keep insisting EZ needs to write a book.  He says he met Dr. Hook many times, like it is just the norm.  I guess it was the norm for him.  Dr. Hook, Dana Plato, Paul Lynde, Mike Douglass and many, many more.  Exactly how did this all happen.  Wrestling referees do not generally cross paths with so many celebrities.  What is the EZ story?
I am afraid we will never know the whole story.  I will keep trying to cajole him to write that book.  I'll even offer him his much-desired cake to write a book.  Still, I'm afraid it won;t happen.  The best that might happen is an occasional EZ short story here.  I'll keep trying for that as well.
His stories are much more interesting than my rambling about hist stories.  To paraphrase the late Andy Rooney (I bet EZ knew him, too), we want the rest of the story! 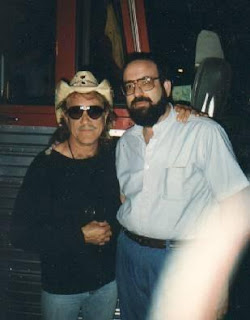