"Cards That Never Were" is a recurring series in which I create virtual trading cards in an effort to correct omissions from various Topps sets over the years.  I borrowed the concept from too many others to list, but I thank them all.

Jerry Moses is the perfect subject for a "Cards That Never Were" feature.  He spent most of his 9 year major league career as a backup catcher.  He finished out his career with 2 games for the 1975 Chicago White Sox.  You would think finding any picture from his two game stint would be impossible, but I found one and created his 1976 Topps card that should have been.  Ironically, the picture (and card) shows him catching, but he only appeared at 1st base and Designated Hitter with the Sox.
Okay, maybe his 2 games did not merit a Topps card.  He was released in September of the 1975 season, which is another reason for his exclusion in the 1976 set.  Still, as a backup catcher, who played for my then-beloved Sox, who wore the coolest uniforms, I decided Moses deserved a 1976 card.
Moses broke in with the Boston Red Sox in 1965.  After a couple seasons back in the minors, Moses appeared for the Red Sox in 1968 and played parts of every season through 1975 in the majors.  In his last six seasons, Moses played for seven teams.
I love this card, with all of its' powder blue and red glory.  Now, if only I could find a picture of Phil Roof who appeared in 4 games with the Sox in 1976. 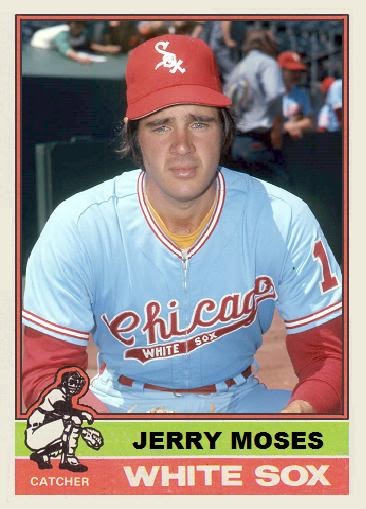