This is a regular series which attempts to combine my lifelong passion for trading cards with my semi-professional interest in celebrities.  I am continuing my theme of featuring celebs wearing jerseys of whoever is playing the Chicago Bears.

Jay Buhner was born in Louisville, Kentucky.  He was drafted by the Pittsburgh Pirates, but made his Major League Baseball debut with the New York Yankees.  He spent 14.5 seasons of his 15 year carer with the Seattle Mariners.  His trade from the Yankees for Ken Phelps was the object of a Frank Costanza tirade on tv's Seinfeld.  On his Celebrity Jersey Card, Buhner is wearing the #12 for the 12th Man. 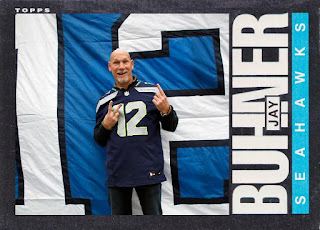 Back again is wrestler Velvet Sky.  I don't think anyone has a problem with repeat appearances by the Velvet One.  For today's Celebrity Jersey Card, she is modeling Richard Sherman's #28 jersey.  As a cornerback, Velvet can cover me anytime and I promise to not even try to escape her coverage. 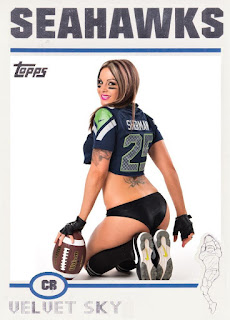 These are awesome! I'd gladly add both of these to my Seahawks PC if they were real.

Thanks. I did a bunch more of the Seahawks over the last few years. They make it easy by having that 12th man thing.