Athletes get trading cards.  Why not celebrities?  At least celebrities wearing athletic jerseys should get cards.  I am doing my best to create cards for jersey-clad celebs.  Today, I continue my theme of featuring celebs who are repping the jerseys of the opponent of the Bears.

Actress Naya Rivera was born in Valencia, California and stays true to her roots by sporting an Oakland Raiders jersey for her Celebrity Jersey Card.  Rivera, who has been in show business practically since birth, really gained fame on tv's Glee.  The #81 could be for NFL Hall of Famer Tim Brown or maybe it is for her namesake, Mychal Rivera. 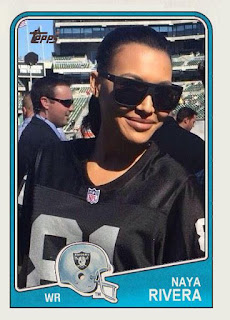 Once again, we have wrestler Velvet Sky appearing on a Celebrity Jersey Card.  This time, Velvet is wearing a Raiders #20, which I am claiming is a Darren McFadden jersey.  The #20 has not been worn with much success with the Raiders, other than by McFadden. 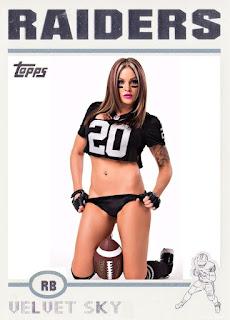