Athletes get trading cards.  Why not celebrities?  At least celebrities wearing athletic jerseys should get cards.  I am doing my best to create cards for jersey-clad celebs.  Once again, I feature celebs repping the opponent of the Bears.

Actor, comedian, writer and producer Paul Rudd was born in New Jersey.  His mother was a sales manager for a television station in Kansas City, which explains his allegiance to the Kansas City sports teams.  Rudd honors the late great Derrick Thomas by wearing #58 on his Celebrity Jersey Card. 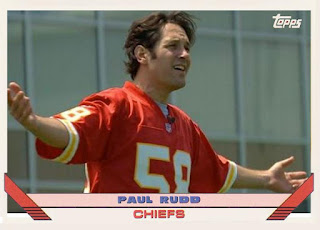 Velvet Sky graces a Celebrity Jersey Card again.  This time, she is wearing #25 for Jamaal Charles.  Charles has had a nice career, but I like Velvet better at running back.  I think Velvet definitely has better moves. 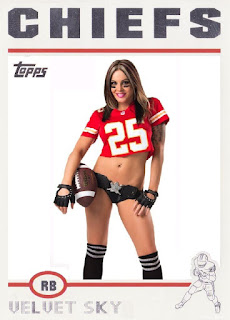