We last saw Ralph Macchio very early in this series.  He was sporting a New York Islanders jersey.Today, we see a younger Macchio wearing a San Diego Chargers jersey.  This could be an "in action" Celebrity Jersey Card, as it is from a scene from The Karate Kid.  Macchio gets extra points for wearing star receiver Wes Chandler's #89.  The card gets extra points for including Pat Morita (aka Mr. Miyagi). 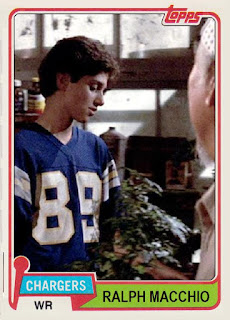 Velvet Sky is repping the powder blue of the Bolts for another of her Celebrity Jersey Card appearances.  She gets extra points (not that she needs them) for wearing #85, regularly worn by star tight end Antonio Gates.  I get extra points for not including a tight end joke. 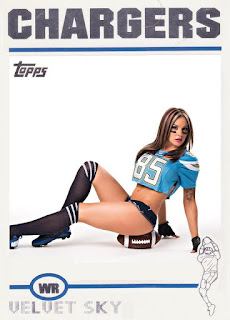