Athletes get trading cards.  Why not celebrities?  At least celebrities wearing athletic jerseys should get cards.  I am doing my best to create cards for jersey-clad celebs.  I am continuing my theme of featuring opponents of the Chicago Bears.

Mike Ditka wearing the Green and Gold caused such anger in Chicago.  Ditka was simply appearing in an ad.  Love Iron Mike or hate him, he is unforgettable.  Now, thanks to this Celebrity Jersey Card, his time in a Packers uniform will not be forgotten.  I just wonder why he didn't wear his usual #89. 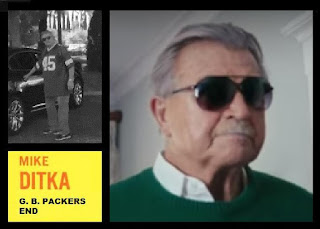 Retired American mixed martial artist and former Ultimate Fighting Championship Light Heavyweight Champion Chuck Liddell was born in Santa Barbara, California.  I have no idea what lead him to the Green Bay Packers, but he is a legit fan.  He is also a legit bad ass.  If he wants to sport a green mohawk to match his #15 Bart Starr jersey for his Celebrity Jersey Card, I will not question him. 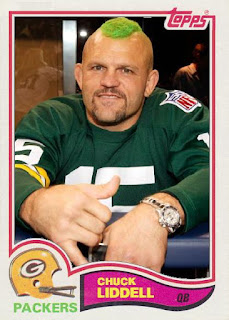