Days of the Dead...This Weekend!!

This weekend, Days of the Dead will again invade the Chicago area.DotD Chicago is one of four yearly DotD events.  The other three are in Los Angeles, Atlanta and Indianapolis (which I always attend, too).
I've previously written many times about the greatness that is Days of the Dead.  I remeber meeting promoter Adolfo at the very first one years ago in Indy.  Several years and many fantastic events later, DotD just keeps getting better.
It all starts with Adolfo.  He and his staff make sure that everything runs smoothly.  I have never seen any major problems at any DotD event.  That is amazing considering the number of variables involved.
I have had so any memorable experiences at DotD.  Lita Ford once broke into song while playing guitar.  Roddy Piper choked me and put me in a sleeper hold.  Felissa Rose gives me warm hugs every time I see her.  I could go on and on.
This year, the guest list includes wrestling Hall of Famer Bret Hart, former wrestling star Chyna, legendary musician Ace Frehley, actress PJ Soles and many more.  This is a power-packed lineup and I plan on spending some quality time mingling with all of them.
I'll be reporting live at the event, along with providing post event coverage on twitter and Facebook.  I'll also post plenty of stuff here after the event.
Don't rely on my coverage though.  Experience Days of the Dead for yourself.It is a blast.  I look forward to it every year and I am sad when it ends.
For more info, check out DaysoftheDead.net.  If you see Adolfo, tell him Johngy sent you. 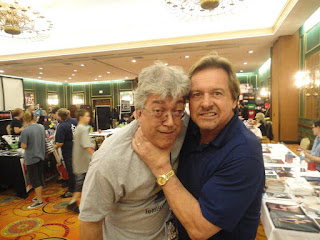