My dad is becoming one of the regular contributors for Friendly Encounters.  This time, he met E'Twaun Moore, to give us a rare appearance from a basketball player.
My dad likes to help me by getting autographs and pictures of the various athletes who appear near him (usually at Bridges Scoreboard).  I also think he just likes doing this.  Maybe I got this bug from him, although it was dormant in his system until recently.  On the other hand, maybe he got the bug from me.  We do share DNA, of course!
Moore was a popular guest.  Perhaps it was because of his time at Purdue or maybe because he was an active Bull.
He is now in his second year with the Bulls.  He was drafted out of Purdue by the Boston Celtics, where he played for one year.  He followed that with two seasons with the Orlando Magic, before joining the Bulls for the 2014-15 season.
Who will my dad meet next?  Who knows?  He's out there looking for celebs now (although he doesn't have his own shirts...yet). 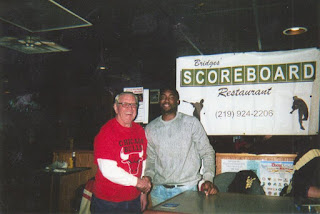 Frank Wroblewski and E'Twaun Moore in Griffith, IN-Winter 2015.
Posted by Johngy at 6:00 AM