This is a weekly series in which I attempt to combine my lifelong passion for sports trading cards with my semi-professional interest in celebrities.  Today, in honor of the Super Bowl, I feature the two participating teams.

Megan Hanson is a center-defensive lineman for the Legends Football League champ Seattle Mist.  She was named #15 on the Hottest 20 LFL Women (shouldn't there really be about a 50 way tie?).  For her Celebrity Jersey Card, she is sporting a #25 (Chris Harris?) jersey opf the Denver Broncos.  I like her style.  I like her team.  I pretty much like all about Megan. 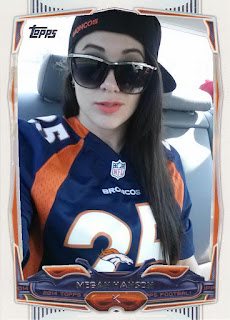 North Carolina native Austin Dillon is a stock car racer.  He won Rookie of the Year in the Camping World Truck Series in 2010 and holds the record for most consecutive poles in the Nationwide Series with four.  For his Celebrity Jersey Card, Dillon is repping linebacker Luke Kuechly's #59. 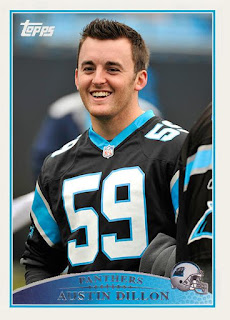