This is a regular series in which I try to combine my lifelong passion for sports trading cards with my semi-professional interest in celebrities.  In the dead of winter, what is better than pretty ladies wearing baseball jerseys?

Adrienne Bailon was the founding member and lead singer of The Cheetah Girls.  She ventured into acting and also work as a television host.  She also co-starred with Julissa Bermudez in Empire Girls: Julissa and Adrienne.  The show lasted one season, but Bailon has kept busy in many other projects.  She also found time to represent the Newark Bears in a charity softball game.  For her latest Celebrity Jersey Card, I had to improvise with a "Just Minors" creation. 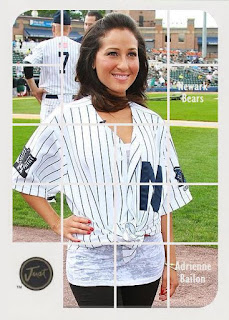 Adrienne's former co-star Julissa Bermudez was born in the Dominican Republic, but raised in New York.  She joined Adrienne in the charity softball game and in a "Just Minors" Celebrity Jersey Card creation.  With these two on the team, the "cute" quotient would be pretty high! 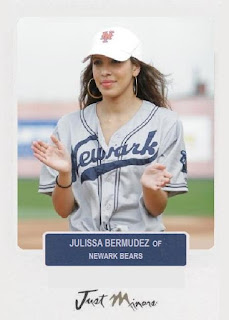