A few months ago, Mad Man Pondo posted a particularly interesting message on Facebook (as opposed to his usual interesting posts).  Quoting the Mad Man, "Memories come and go but a picture last forever. We are all marks or we wouldn't be in this business today. Don't let opportunity pass you by. If you want to take a picture, who is anyone to tell you not to. I've spent a few times around Luna Vachon, but didn't take a photo with her. I regret that a lot. Diary of a Mad Man message 7."
I love it and I love that it came from Pondo.
Pondo came to Resistance Pro with a well-earned reputation as a hardcore wrestler.  When "Mad Man" is your name, you don't expect Miss manners, however Pondo is actually quite the opposite outside of the ring.
I don't want to ruin his reputation, but Pondo is a class act all the way.  Whether it is being a leader and a teacher in the lockerroom, posing for dozens of pictures at events or putting on a clinic in the ring, Pondo gives himself completely.
He also does it all under the radar.  He doesn't seek attention, but he gets it, often times at the vary conventions he attends to meet his celebrity favorites.  This is why it is so cool to hear him talk about meeting celebs.  Pondo is not above admitting he is a fan of whoever.  He's not afraid to pose with Ric Flair, one of the all time greats and a mark out moment for anyone.  Pondo is not ashamed to admit he marks out.
Good for Pondo.  I am glad he meets so many of his favorites.  I am also glad he posts all of these pictures, moments and thoughts.  I am even happier to have a few such moments with Pondo for myself.  Yes, I will mark out for Pondo every time! 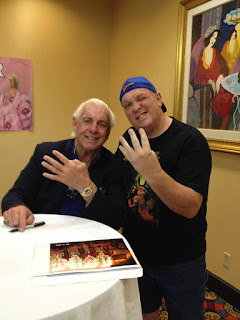