I met Eric Katz while he was an intern with the Chicago Bandits.  Eric worked with broadcaster Mike Knezevich.  He handled some interviews, as well as being Mike's broadcast partner.  I was impressed with his work all season.
Eric's status is up in the air for 2016.  I really hope he gets to work one more year with the Bandits.  I am hoping to use Eric on some Johngy's Beat projects and to join Eric and Mike in the broadcast booth again.
It was fun watching Eric develop on the job,  He's a young guy with a lot of talent and passion for what he does.  His future is bright, no matter what path he takes.  It is great to see the youth of today getting their feet planted as their careers start to develop.  I envy Eric for getting such an early start.  Despite an interest in writing, my first published piece came when I was 30+ and Johngy's Beat started when I was 40+.
I wish Eric a lot of luck along the way and I hope to see him around the ballpark this summer.  In the meantime, I leave this picture of Eric with Chicago Bears Hall of Famer Richard Dent. 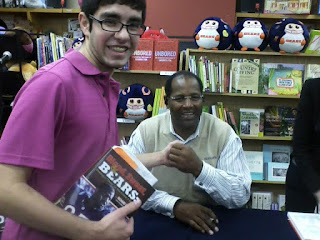 Eric Katz and Richard Dent in Chicago, IL-December 2012.
Posted by Johngy at 6:00 AM