The last "Friendly Encounters" featured two young girls meeting a horror icon.  Today, I again feature kids.
I first met Danny's mom way back in 1989.  We worked for the same company, but in different offices.  Spoiler alert: we even dated for a while.).
Flash forward 35 years or so and Jodie has four children, including young Danny.  When Resistance Pro held a show near Jodie's home, I invited them and they accepted.
Because I have a little extra access at RPro, I was able to have them meet most of the wrestlers before the show.  One such wrestler was Tommy Else (then known as Eric St. Vaughn).  This i another of the pictures that I absolutely love.
Danny (in a Johngy shirt) and his friend are striking the ESV pose.  This was around the best time at RPro.  Thins were building and everyone was having fun.  You could feel the anticipation of something big.  Unfortunately, RPro hit some roadbumps, but it is still around, putting on even better shows, despite the lack of media exposure.
I love seeing the joy in the faces of kids at these shows.  ESV (Tommy) was an especially big hit with the kids.  Even though his character was a bad guy, his rapping bit and ring presence made fans (especially youngsters) jump on the ESV bandwagon.
One other bit of fun is the Chrris Castro photobomb.  Chris is one half of the 2 Star Heroes tagteam (with Matt Knicks).  They have moved on from RPro and wrestle for Freelance (and other places).  They were always entertaining in and out of the ring.
Lastly is Danny himself.  Seeing Jodie with four great kids is heartwarming to me.  We were friends, then dated and eventually refound a friendship.  Life is weird at times.  It is also wonderful at times.  I try to find the joy as much as possible.  I often fail, but I do find the joy in those young boys' faces! 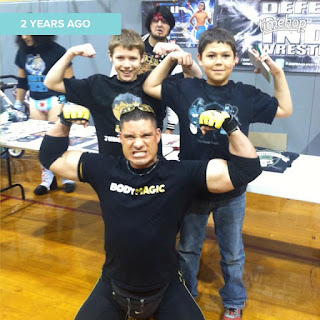 Danny Schaeffer, his friend and Tommy Else in Chicago, IL-Late 2013.
Posted by Johngy at 6:00 AM