Thank You To The Rockford IceHogs

The season is over for the Rockford IceHogs.  Thee team got swept by the Lake Erie Monsters in the first round of the AHL playoffs.
The IceHogs finished with a record of 40-22-10-4, good for 3rd place in the Central Division of the Western Conference.  Although only three wins behind the Monsters in the standings, the IceHogs just couldn't get it going in the playoffs.  While it is disappointing to be ousted so quickly, the success of the season should not be overlooked.
Being the top affiliate of the Stanley Cup champion Chicago Blackhawks has advantages and disadvantages.  The main job of the IceHogs is to develop players to keep they Hawks strong.  Towards that goal, 22 IceHogs alumni have won at least one Stanley Cup with the Blackhawks, while seven of those have won two Stanley Cups.
Keeping the IceHogs successful under these circumstances is a challenge, but one that Coach Ted Dent embraces.  Coach Dent never uses this as an excuse, but he faces challenges that most AHL coaches don't have.
I have had the pleasure of covering the IceHogs for the past three seasons.  Rockford is an easy 90 minute ride west.  I have met a few hockey legends in the Press Box.  I have found some great food in the area, too.  The whole experience has been fantastic.
I want to publicly thank Mike Peck, Nate Haeni and the entire IceHogs organization for their hospitality.  I look forward to returning next season and I encourage everyone to check out IceHogs.com to follow the team in the offseason. 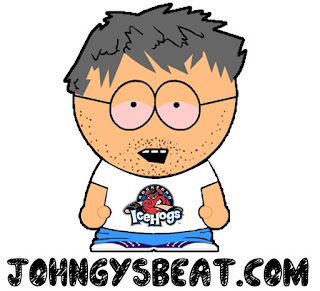 Sounds like a great organization. Some day I need to go to Rockford and catch a game!!
Congrats on a great season!