This is a recurring series in which I create virtual sports trading cards for players who were somehow missed in the regular Topps sets of yesteryear.  It is a concept I borrowed from too many others to credit, but I thank them all.
With the Chicago White Sox facing off against the Texas Rangers, today is a great day to present my 1979 Topps card creation for former catcher Bill Fahey.  Fahey played for the Washington Senators, Texas Rangers, San Diego Padres and Detroit Tigers from 1971-1983.  He played parts of every season in the majors, with the exception of 1973 and 1978.  Despite not appearing in the majors in 1973, Topps deemed him worthy of a 1974 card, even though they had cards for Dick Billings and Ken Suarez, the two catchers who played the most for them in 1973.  Including Fahey was an odd choice.
After spending 1978 in the minors, Fahey did not receive a card in the 1979 set.  This decision made sense, although as a Fahey fan, I did not like it.  Further cementing the decision was his trade to the Padres in October.  The Padres ended up having three catchers (Rick Sweet, Gene Tenace and Dave Roberts) receive Topps cards in 1979.
Despite all of that, I wanted Fahey to have a card in the 1979 set and I have made one.  If this had been an actual card, it would be a capper for his tenure with the Rangers.
On a side not, Cuzz Gekas and I inducted Fahey into our Backup Catcher Hall of Fame.  You can read the latest on the BCHOF at Backup Catcher Hall of Fame: Class of 2015 at Tru School Sports. 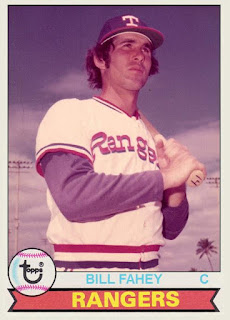 After a watchful investigation of baseball in the 1970s for my digital book and site, I was astounded at what number of the diversion's stars appeared to over and over come up huge in the post-season. Without a doubt, there were men like Bucky Dent and Gene Tenace, who ascended from indefinite quality to convey a pivotal turning point or to try and assume control over an arrangement. Be that as it may, it was a few of the game's geniuses who appeared to reliably emerge on the enormous stage.